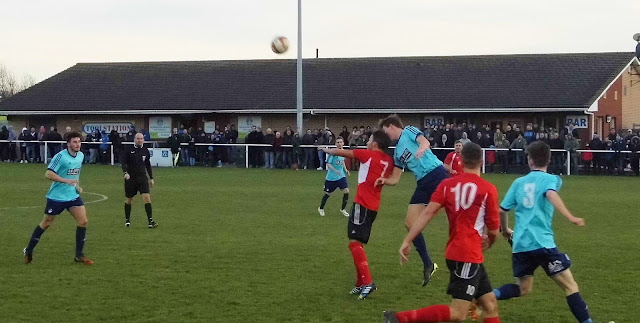 The second half started at the same 100 mile an hour pace and on the hour mark Sunderland RCA further extended their lead with a sweeping move that saw Gordon race on into the box and fire into the bottom left hand corner as Snaith came racing out.
Fifteen minutes later Hemsworth pulled a goal back when Samuel Jones lashed the ball home from the edge of the box to make it 1-4 this encouraged the home side into their best period of play in the tie so far and they were pushing the visitors back.  Indeed Jones could have got a second with ten minutes remaining but his unmarked header scraped just the wrong side of the post.

Then a sublime moment when Larkin completed his hat trick and made victory secure as the visitors went 5-1 to the good.  A cross off the left by Ross McNab looked to be travelling out of play deep at the far post but somehow Larkin took the ball down under control and in the blink of an eye lashed the ball home past a shocked home defence.  A fantastic goal to round of a fantastic afternoon for the side from the north east, Larkin would of course be delighted with his contribution but the overall commitment from the whole of his teammates I'm sure is something he would acknowledge.  As for Hemsworth they gave it a good go and with some better finishing would probably have been in this game for a lot longer than the score line suggests.  But the game overview would have to declare some clinical finishing alongside unbelievable work rate for the cause from Sunderland RCA.
The return short walk to the station was made by terraces overlong the railway line and
the former Milton Terrace and as the weather was closing in to freezing we were glad to see the slightly delayed Pacer unit pull into Fitzwilliam station for the departure to Sheffield before a quick change decamped us back at base station just before 7pm.
Not a long journey today but a tremendous game with a good historical look around the former pit heartlands of Yorkshire and overall a enjoyable day out.

Posted by we all stand together at 21:58

we all stand together
The wonderful world of non-league football [summer NCL rugby league] from travelling to and visiting new clubs and enjoying the things that make them original and special to their supporters and officials.