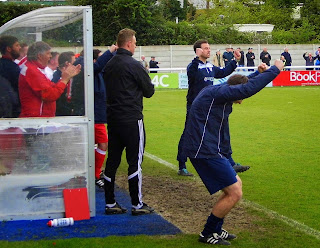 The remaining 10 minutes were tense with Llanrug trying to force another equaliser on at the final whistle from referee Terry Atkinson, who had performed admirably, they looked drained and devastated, Llanrug should not be. Of course somebody has to win but they had performed fantastically well and contributed so much to a wonderful occasion.
At the final whistle John Hasledin and his staff celebrated on the bench as the players congratulated one another and also it was good too see commiserated with the Llanrug players.
Time then for the Mawddach Cup to be presented to Holywell captain Sam Jones and for The Wellmen and their large following to enjoy another superb celebration and they tell me it will continue back home in Flintshire tonight!
A credit to both sides and the third team headed by referee Terry Robinson and also to Bangor for sectioning off a front portion of the stand to enable a well organised presentation.
﻿

The blog was delighted to meet up with many friends from supporters to players of Holywell this afternoon I have said before its been such a welcoming club and I for one cant wait to cover some of their games next season.  I know the supporters feel the same but for now they must enjoy the superb season of massive highs that have been fully celebrated by all concerned before next season challenges start.
A similar return via the rails to Llandudno Junction for the first change before another one at Manchester, nicely split with a visit to the big M's for some food and then a very interesting journey back over the peaks with a fellow traveller who the blog got into conversation with discussing all and everything!
Much like Newtown last week loved Bangor too and fully enjoyed attending some of Holywell Towns wonderful season, well done all!

Posted by we all stand together at 13:17

we all stand together
The wonderful world of non-league football [summer NCL rugby league] from travelling to and visiting new clubs and enjoying the things that make them original and special to their supporters and officials.